Costume in the period carried on features of costume in the Tang Dynasty (618-907). Although it followed that of Tang dynasty, Song dynasty clothing system had its unique style.
Men’s garment continued to have the style of cross-collar with upper shirt pulled to the right side or straight   collar plus turban head. According to the rankings of the officials, the colours of the robes and shirts varied. Everyone wore simple head covering which slowly evolved into a hat from the emperor to all levels of officials. The only exception was that during religious ceremonies or formal court gatherings, everyone wore formal crowns. The scholars favoured the old fashioned way during that time, and the most popular way was called Dongpo Wrap, a way to wrap a piece of silk around the head. 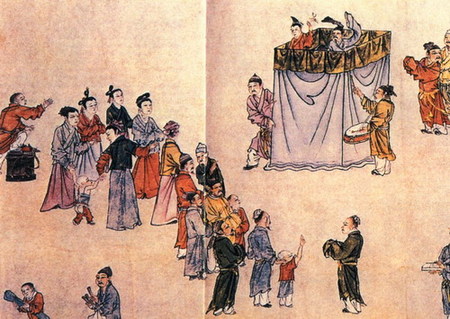 Women’s clothes had quite a variety of different styles in Song Dynasty. Compared to men’s garments, women’s garments were more varied. There were shirt-jacket, coat, gown, big sleeves, Beizi, short sleeves and others for the upper body and skirt for the lower body. For women, short jacket and skirt were casual wear. Since it was tight to the body, it was good to wear when doing housework and thus became very popular.
For women in Song Dynasty, Beizi was a very common style. Everyone can wear it, from the queen to service women. Beizi was an outer jacket, straight collar, length over the knee with either wide or narrow sleeves. Under both armpits there were slits that were over two feet long, which was not common in other styles of female garments.
For women with high social status, there is another common style called "Grand Sleeves", named after the two big wide sleeves. It was common to wear this kind of clothes with long skirt, colourful silk shawl and a hanging jade piece.
The skirts for women in Song inherited the style from late Tang Dynasty period. A skirt had at least 6 pieces of fabrics. There were many styles, including pomegranate skirt, double butterfly skirt and embroidered skirt.
“Tulip skirt” was worn by women from rich families. They liked to use tulip grass to dye skirts so that the fragrance slowly permeated the air. “Hundred-Pleat Skirt” is one kind of skirt with pleats all over. If tiny folds were between pleats, the skirt was called “Hundred-Fold Skirt.” Meanwhile, with silk sashes to tie around the waist and a piece of jade ring hanging down, the outfit appeared quite stylish.

The official costumes in the palace during Song dynasty followed the Tang dynasty, so they were similar, both falling into the following categories, Chaofu (court costumes), Jifu (ceremonial costumes), Gongfu (formal robes), Rongfu (military uniforms), Sangfu (funeral costumes) and Shifu (seasonal costumes).
A court costume was composed of a red upper garment and a red lower skirt worn over white underwear made of gauze. Officials fastened a big band made of gauze around their court garments, which were adorned with brocade ribbons, jade ornaments and jade bracelets, and wore black leather shoes and socks of damask silk. The ranks of officials were distinguishable according to different combinations.
Formal robes had an oblique collar, big sleeves, and a leather waistband. Colours were used to distinguish the ranks of civil officials for dressing type. For example, cyan was for officials above the ninth grade; green, above the seventh grade; red, above the fifth grade; and purple, above the third grade.

Daily casual costumes also had distinctive characteristics besides official costumes used at the court. The casual costumes in the Song Dynasty included Pao, Ru, Ao, Duanhe, Lanshan, Shan, Zhiduo, Hechang, and others.
Pao (gown) fell into two types, with broad sleeves and with narrow sleeves. The gown for an official was made of brocade, and that for a non-official was made of white cloth. Ru (jacket) and Ao (coat) were the necessary costumes for common people in their daily life.
Duanhe (coarse cloth jacket) was short clothes made of coarse cloth worn by poor people. Lanshan (scholar's blouse) was a kind of men's long robes with a lateral ribbon attached to the lower hem.
Shan (lower garment) followed the ancient code of upper garment (jacket and blouse) and lower garment (skirt), and it was the style of Mianfu (mitral garment), Chaofu (court robe) or Sijufu (private garment).
Zhiduo (straight long robe) was a long loose robe without any splits at the lower part (but there was a central seam on the back part). Hechang (cloak made of cranes' down) was long and loose. It was a kind of precious fur coat made of the down of crane and other birds. Its lower hem reached the ground.
References:
1. Han Couture: Song and Ming Dynasty Clothing [Internet]. USA, New York: Global Competition Series; 2007-2011 [cited 2013 May 3]. Available from: http://hancouture.ntdtv.com/en/sm.htm.
2. Costume in the Song Dynasty [Internet]. China: Ministry of Culture;2003[cited 2013 May 3]. Available from: http://www.chinaculture.org/gb/en_chinaway/2003-09/24/content_28394.htm.